Hot Wolves in the Freedom of Bruges

Wolves are hot. There is a lively public debate about the desirability of allowing a few wolves to settle in the Netherlands, and the related civil society – foundations, working parties, action groups – is flourishing. So let’s talk about wolves today (if only not to be accused of having a certain bias in my preferences for certain animals). 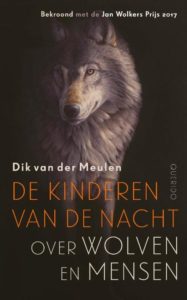 Dik van der Meulen has written a very nice book about the history of wolves in the Netherlands (De Kinderen van de Nacht) (and he can really write!), but after finishing I still missed something. I wanted to devote part of a chapter in the book on the history of Dutch nature to the wolf, and was trying to get a better grip on the interaction between men and wolves (and women and wolves) in the past. And following my natural instincts, I thought it might help to quantify: how many wolves had there been? how did this change over time? And then I found two long forgotten Flemish articles about the wolves in the countryside surrounding Bruges between 1480 and 1680, which did exactly this: present the quantitative data. In this case of the number of adult wolves and cubs that had been killed in the Freedom of Bruges; these were registered because a handsome reward was paid out by the Freedom for each dead wolf that was presented to the authorities. 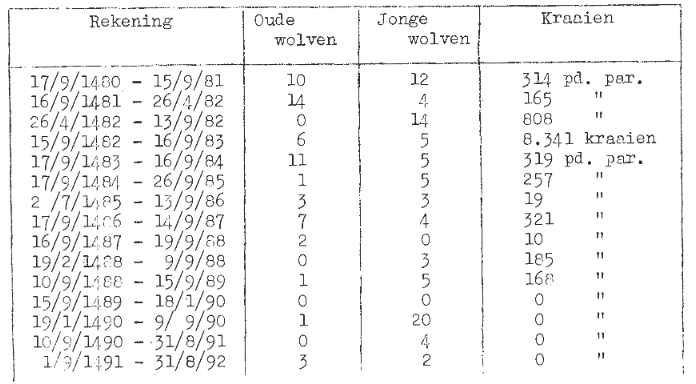 The articles by Maurits Coornaert (Wolven en ander ongedierte in het Brugse Vrije, published by the Heemkundige Kring Rond de Poldertorens in 1968) discussed the source, gave an impression of what happened, presented the data of the wolves killed, but fell short of one thing: to make a nice graph of the two centuries of data. 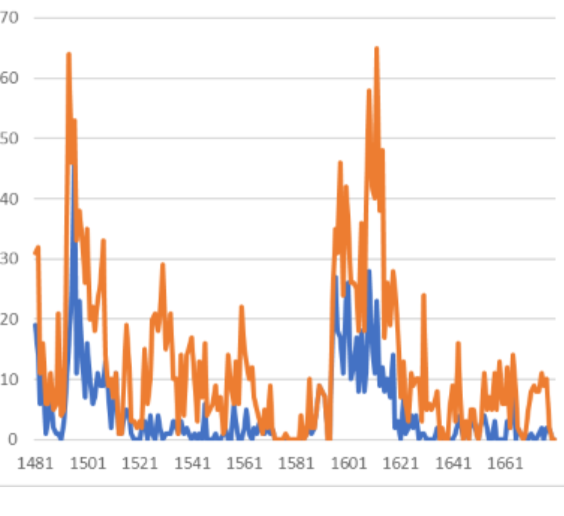 The graph that could be made, is, I think, rather beautiful (only nice maps perhaps beat nice graphs). The graph shows the series for ‘old’ ‘mature’ wolves, and the total, which includes the (many) cubs. You can read the interaction between wolves and men immediately from the two cycles that appear so clearly. A cycle starts with a devastating war – the 1490s against Maximilian, the 1580s and 1590s against the Spanish. The countryside is devastated by armies and the diseases they take with them – peasants flee to the cities, sometimes leaving their livestock behind, or are killed by the violence of marauding armies. In short, the countryside becomes a paradise for the wolves, who move in from forests to the south and from the dunes to enjoy the bounty, and they of course procreate spectacularly. In the wake of warfare comes an explosion of the wolf population, which makes it even harder to pacify and resettle the countryside. But the high bounty on killing wolves starts to do its job – and people organize hunts and shooting parties. We see the graph suddenly moving up, and in peak years dozens of wolves and cubs are shot – the peaks are 64 in 1494 and 62 in 1612. Gradually, the problem is brought under control, the wolves move back to their refugia in the dunes and the woods, waiting for the next disastrous war. Had the data continued, we would probably see another surge after the wars with the French in the final quarter of the 17th century, and the last resurgence of wolf power probably occurred during the French war of the 1792-1815 period.

The graph summarizes this dramatic interplay between wolves, war and (wo)men. By playing with the proportions of the graph (making it taller and reducing its width) one can make it more dramatic, I noticed – the swings become even more violent, in a way. You really need to have these annual observations for a long time period to make this point forcefully. Good old ‘histoire serielle’ is still a powerful tool. Perhaps that is a nice conclusion of this rather dramatic story.