In my first blog I promised to write about the smallest bird that visits my garden. 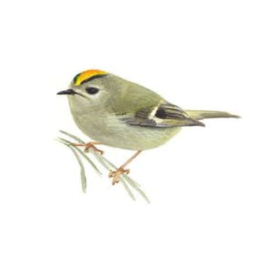 It is the goldcrest, a very tiny bird that mainly feeds on insects living on pine trees, and the smallest in the Netherlands. I seen it once or twice per year, when it visits our pine and I happen to look at that window (on the first floor), and since it is such a rare event, it always feels very special to watch it move elegantly from one branch to another, sometimes making its distinctive call (a high peep-peep – I cannot think of a better description). 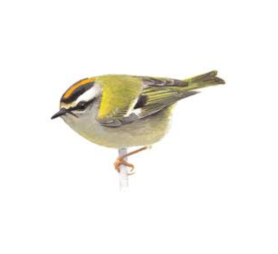 It is a rare bird, mostly living in forests, in the top of the trees, and therefore difficult to find, where it not for its ‘peer-peep’. The interesting thing is that it has a sister species, the firecrest, which is equally small, has the same basic colours and appearance – but only the stripes on its head a somewhat different, and the most distinctive on its head is not yellow, but orange, sometimes a bit reddish, which explains the name firecrest (in Dutch their names are goudhaan and vuurgoudhaan).

The firecrest is a relatively new species; the first observation as a breeding bird is from the 1920s, and it is still very rare. Because the area with pine forests has been expanding a lot during the 20th century, they are both doing well. But the question is: why does nature create such very similar birds? Is this God’s way of testing the skills of birdwatchers? And goldcrest and firecrest are not the only pair of very similar birds. There are many, such as Grey/Purple Heron, Hen/Montagu’s Harrier and Willow Warbler/Chiffchaff, and the list is much longer. There is even a concept for it: they form pairs of sister species. One explanation (as usual in academia, there is debate about this, but this is the explanation I understand) is that it is caused by the alternation of periods of extreme cold and more ‘normal’ temperatures during the last 2-3 million years. There were several ice-ages, which acted as accelerators of Darwinian evolution. Before these cold spells, populations of birds were spread all over Western Europe, but with the dropping of temperatures and the coming of the ice cover, they retreated to so called refugia in the south: behind the Pyrenees, the Alps, into the Balkan. In these refugia evolution continued, and these now isolated populations developed slightly different traits adapting to the slightly different niches they found there. Much like the famous finches that Darwin analysed on the different Galapagos Islands. After the Ice Age, they reconquered the north again, but now as separate species. And because the period of separate evolution was short – in Darwinian terms a million years is almost nothing – the differences between these species were only small. That’s probably how the ice ages induced an even richer nature.