You may perhaps know that Sarah and I are trying to write an ‘airport book’ about family systems, gender relations and their impact on economy and society in the extremely long run (from hunter gather societies to the present). This will be based on the findings of the agency-project that we together with Selin, Auke, Lotte and Jan Kok worked on a few years ago. I am not sure an ‘airport book’ is an existing concept, but you probably get the idea: an accessible but serious academic work that you buy when you have to spend quite some time in a plane. 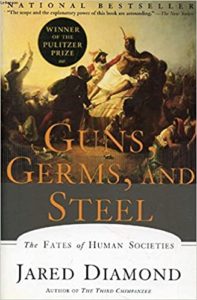 Jared Diamond’s book on Guns, Germs and Steel is probably the archetypical example: it is not only a pleasure to read, but it has a lot of new insights and a clear message. We have used this idea also in teaching, inviting students in the Great Divergence course to write a chapter for such an airport book (instead of a ‘normal’ academic paper). We discussed with them what the features of such a book are – for example the importance of nice stories and anecdotes that illustrate the main message – and they were asked to bring their favorite book with them and explain why they liked it.

Anyway, this is a bit a detour of the real story of the blog. At some point we try to explain how the Neolithic revolution – the invention of agriculture – leads (after a few millennia) to the development of cities and states that are highly unequal, both in terms of political power and gender (another argument of the book is that these two inequalities often move together and reinforce each other). But we needed a story to show the dynamics of the process, which was driven – we ‘know’ since Charles Tilly’s work on state formation in Europe between 990 and 1990 – by warfare. In order to survive the next round of fighting, states have to prepare, by raising funds (taxation), organizing an army, setting up a bureaucracy which can do both. This is all very well documented for the ‘recent’ period, but how did this work in deep Antiquity? Based on the Dutch experience, we had this idea of an absolutist king – say Charles V, or Filip II – who in order to  streamline the state and increase its capacity for warfare, imposed new taxes, and robbed the provinces and cities of their privileges. But how does this process work when there is not yet a state which drives the process? 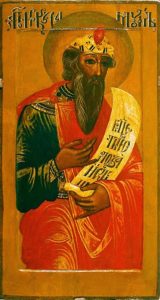 And then the bible came to help us with a fascinating story about ‘bottom up’ state formation. The relationship between state formation, warfare, religion, and gender inequality is exemplified in the Old Testament book of Samuel, which recounts the Israelites’ struggles against the Philistines after they settled Palestine around 1000 BCE. The people(s) of Israel was a loose federation of tribes (12 according to the bible) held together by kin relations and governed by a ‘judge’, a spiritual and charismatic leader who also adjudicated conflicts between (and within) the clans. They were in an almost constant state of warfare with surrounding tribes, but had come under strong pressure because they had lost a number of battles against the Philistines. This was a sea faring people that had settled in a number of port cities of Palestine, and who, moreover, possessed superior iron technology for making weapons (a fact mentioned by the writer(s) of the biblical story and confirmed by archeological research). 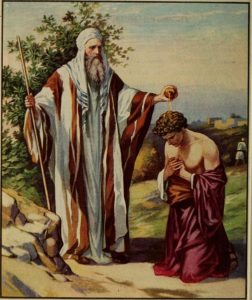 The desperate state the tribes of Israel were in, made the elders ask for a King, to lead them into battle. Samuel, the judge-without-royal-power, had two sons who were not fit for the job. I Samuel 8 tells the story (in the words of the English James’ Bible):

“When Samuel grew old, he appointed his sons as Israel’s leaders.]2 The name of his firstborn was Joel and the name of his second was Abijah, and they served at Beersheba. 3 But his sons did not follow his ways. They turned aside after dishonest gain and accepted bribes and perverted justice.

4 So all the elders of Israel gathered together and came to Samuel at Ramah. 5 They said to him, “You are old, and your sons do not follow your ways; now appoint a king to lead] us, such as all the other nations have.”

19 But the people refused to listen to Samuel. “No!” they said. “We want a king over us. 20 Then we will be like all the other nations, with a king to lead us and to go out before us and fight our battles.”

21 When Samuel heard all that the people said, he repeated it before the Lord. 22 The Lord answered, “Listen to them and give them a king.”

Why was a King important? The elders complained that the cooperation of the 12 tribes failed in times of crisis. This had happened recently:

“When the Israelites saw that their situation was critical and that their army was hard pressed, they hid in caves and thickets, among the rocks, and in pits and cisterns. 7 Some Hebrews even crossed the Jordan to the land of Gad and Gilead”.

This points to the key problem of the combination of 12 different forces that had in the past been the army of the people of Israel: the most rational way to fight a battle was not to fight at all, but let others do the fighting and bear the casualties. But if all behaved like this, the army collapsed, as it had done in the past. A king would unify the command structure of the army, and force all tribes to fight. Therefore the elders of Israel demanded a king. Samuel finally yielded to their demands, Saul was selected and anointed, who was very successful in the next rounds of warfare. He was succeeded (to make a long story short) by David, who further expanded and deepened the state of Israel – and won many a war. So the institutional innovation to introduce kingship to unify the loose collection of 12 tribes of Israel (or in fact the borrowing of this idea from abroad – the elders explicitly referred to ‘such as all the other nations have’), laid the basis for the ‘golden age’ of Israel personified by king David and his son Solomon. At least that is how you can read this story.

That unified command structures were necessary for warfare, was also acknowledged by Republican Rome, where in times of war a ‘dictator’ was appointed for a year with unlimited powers to defend the city. The Dutch Republic had a rather smart solution for it: its default power structure was republican, with a highly fragmented authority (each province and within it each city was in principal autonomous), but in times of crisis, with hostile armies at the borders, it would fall back on an alternative (or perhaps supplementary) power structure of the stadholders, the house of Orange, as leaders of the army.

Samuel, however, never fully agreed with the idea of a strong king. He predicted that the consequences would be grave – but that is the story of tomorrow’s blog, as this one is already far too long.

The section from the Bible are taken from https://www.kingjamesbibleonline.org/