Is it possible to identify the most beautiful notes in classical music? Of course, taste is subjective, and what I like may be awful or boring music for you. Still, the Dutch classical music radio network asks their listeners to select their favorites and constructs a ‘heart and soul’ top 300 on that basis every year. So we have a starting point, as Mattheus Passion has always been no.1 on that list. And it seems reasonable to assume that the most beautiful notes are part of the most beautiful work of musical art. Following this logic, the next question becomes: which parts of the Mattheus are the best? 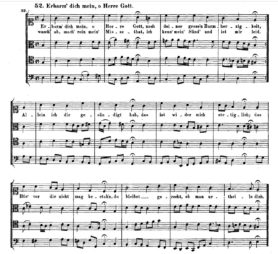 Many would probably select the famous altus solos ‘Erbarme dich’ as the most dramatic and finest part of the entire piece. Petrus, after having betrayed Jesus for the third time, repents, and asks for mercy, and the music perfectly reflects this state of mind (and Petrus of course represents all believers, making it very ‘personal’). Perhaps the first notes by the violin, which introduces the theme of the aria, are already the best – they in a way anticipate the entire aria, and we hear the deep sorrow of Petrus in the tune. Nothing perhaps beats ‘Erbarme dich’ performed by a good countertenor!

But on the other hand, what makes the Mattheus Passion outstanding is perhaps not the aria’s, but the harmonic complexity and moving melodies of the three parts – the opening chorus, the last chorus of the first part, and the concluding chorus – that are in many ways unique in the history of classical music. Of these three, the second one, ‘O Mensch bewein dein Sünde gross’ was initially part of the Johannes Passion, but in the final edition Bach moved it to the Mattheus. This was a significant step: a statement that he wanted to put all eggs in one basket, a strategy that was successful in the end, as we have seen, as the Mattheus dominates the rankings. Initially, when I  tried to sing it (as part of a choir) I did not like it a lot, but since my appreciation has gone up strongly, and now I particularly enjoy the  sentence ‘und legt dabei all Krankheit ab’, where Bach creates a series of incredible disharmonic harmonies (but difficult to sing! I really struggled here) that in a paradoxical way express both the Krankheit and the ‘doing away’ of it in a very moving way (in the opening chorus of BWV25 about the same problem he achieves a similar level of chilling disharmonic harmony). So it has become one of my favorite parts of the Mattheus – but that is perhaps not sufficient for a number one position here (but I would not vote against a place as runner up).

As you may know, the best, most dramatic, part of the Mattheus is without doubt the opening chorus. It reflects a procession, the believers walk in a kind of dance up Golgotha hill, and you can feel each step as the continuo – the lowest bass – gives an almost constant pulse. Two moments are particularly beautiful, but my judgement may be affected by the fact that the bass-line plays such an important part in them. The first bars when the choir joins the orchestra with its melody are extremely moving, and towards the end, after the bass-line has been silent for some time, ‘we’ rejoin again (in bar 85) with the main melody, and the entire piece culminates in a highly dramatic way. You have to know that this is very complex music: two choirs (four voices each) are interacting with each other, assisted by two orchestras, who add their own tunes and counter-tunes. The very best moment, however, is, I think most listeners would agree when on top of this, a third choir joins – a boy’s choir usually, which adds their own high pitched song to this already extremely complex structure. Their ‘angelic’ voices are high up in the air (sometimes they are also placed in an elevated position – for example near the organ), but their tune mixes with the other harmonies in a very natural way (as only Bach could achieve), creating an incredible sound, connecting the entire ensemble to their position close to heaven. The effect of this is overwhelming, in particular the first time the boys and girls intervene. It is perhaps no coincidence that Bach, always sensitive to the meaning of numbers, in this cases uses three choirs to achieve the ultimate.

So I propose to nominate the bars 30-31 of Bach’s Mattheus Passion for top position in ‘most beautiful’ notes in classical music. In a way, the young boys and girls of the ‘boys choir’ (knapenkoor) are the real stars here, and it is ironic that they never get the applause they deserve (the audience is supposed to applaud after the second and final part, and usually the knapen have gone home by that time. The fun of this blog was to think this idea through, listen to various recordings again, and try to find the right words for ‘music’, which is almost by definition something ‘beyond words’; and to try to convey some of my enthusiasm for this music to you. Don’t hesitate to listen to the recordings on Youtube: Van Veldhoven is a fine performance, Reinbert de Leeuw a more experimental, Herreweghe is also excellent. It is the right time of the year for enjoying the Mattheus Passion.

Continue reading: The growing pains of the digital economy (6-4-2020)