Posted on 18/11/2018 by Mick Arnoldus
in: Categories: Blog, Education, and The Great Challenges.

The docks of Tata Steel

Students of The Great Challenges specialisation ventured on a field trip to Tata Steel this week. The Dutch word for it, ‘schoolreisje’, makes it sound like we are back in preschool again, but this time our coach was filled with post-adolescents and even some actual adults. After some very minor delays we caught our first glimpse of the Hoogovens. The weather made an effort of its own to enhance the desolate industrial outlook, but first we were welcomed with a (free!) cup of coffee or tea inside the visitors centre.

Tata Steel in IJmuiden used to be a Dutch enterprise, but taken over by the Tata Group, India just over ten years ago. The Hoogovens however make for a classic story of entrepeneurial succes. As emphasised by one of the company’s big chiefs during the lunch, one of the key factors here is location. The Netherlands are a brilliant location for businesses already, and at the locks of IJmuiden access to all modes of transport is well established.

Before his talk however, we went for the tour. We switched coats and coaches, and put on the obligatory safety glasses and helmets. The bus took us past blast furnaces, gas installations, and mountains of iron ore. Everytime a distant orange glow was visible inside one of the huge buildings our attention was drawn to it, hoping to see some liquid metal splashing around. Highlights included trainwagons filled with blazing hot steel, big yellow clouds of dust, and of course the enormous scale of it all.

The actual highlight however took place outside the bus. Our first stop was one of the steel-rolling plants. Through earpieces that functioned as hearing protection simultaneously, we received detailed explanation of the spectacle inside. Big red hot chunks of fresh steel came rolling in, to be flattened again and again until they grew thinner and considerably longer. The more surface the steel occupied, the more heat could be felt coming off. Right before a slab of orange glowing steel got sent through another roller, it would be sprayed with water to remove oxidation. This produced steam, which made the temperature rise further.

After this we took a look in a galvanising plant, where thin rolls of steel were put through a sink basin, which made the steel quite shiny. This was one of the more modern plants on the terrain of Tata/Hoogovens. Most of the process here is automated, and the only times a lot of workers are present is when something breaks down. This was not the case during our visit. Lunch arrived shortly after this, enthusiasticcaly consumed by all of us. Another presentation and a video shown by the aformentioned big chief told us about Tata Steel and Tata Group.

Tata presents itself as a company that tries to do more than just make a profit. At Tata Steel, we saw a lot of measures to reduce pollution of the direct environment and beyond. Roads and tires are kept wet to prevent fine particulates from spreading. Even the sizeable heaps of iron ore at the docks are sprayed to prevent wind from catching the soil. Nearly all water that does not evaporate is recycled endlessly, as are a lot of the gasses involved in making steel. Making steel remains a dirty job nonetheless, and local towns have recently become more vocal about their complaints concerning pollution. 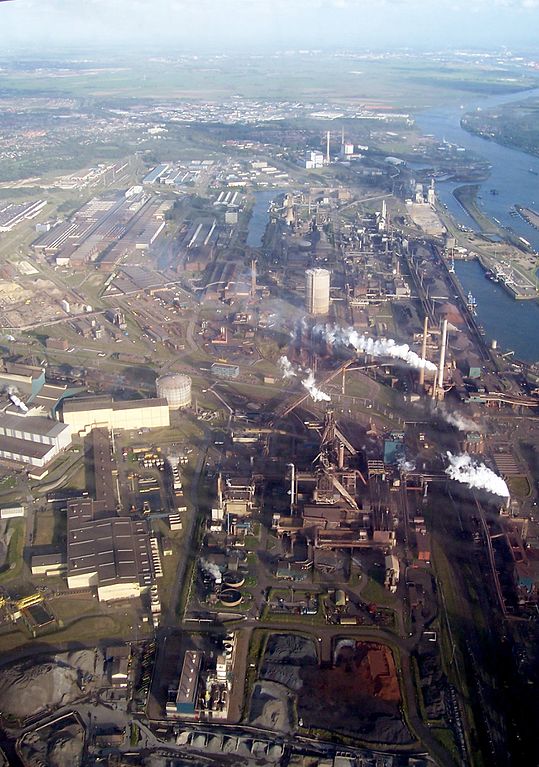 Aerial shot of the steel plant

Tata Steel is researching a process of steelproduction that reduces carbon emissions a great deal. Somewhere in the regions of 90%, if I remember correctly. It is unsure yet if and when this new plant will be placed or tested in India or at IJmuiden. This big focus on R&D does fit with the bigger picture of Tata Steel, which has branded itself on its high quality steel for a long time. In a way we have witnessed a lot of the mechanisms that are explored in the course students are following at the moment: Made in Holland: Global Dutch Enterprises from VOC to Shell.

We have considered entrepeneurship, the relationship between big corporations and government, labour relations, and corporate social responsibility. Even if we, the students, might have only been preoccupied with our own subtopic at the moment. The trip to Tata Steel has been an enjoyable event, with lessons that have been learned but especially sights that have been seen.