In the 1990s there was a lively debate among economists about the proposal to establish the European Monetary Union, of which the common currency, the euro, was the most tangible symbol. A smooth functioning of such a monetary union required a coordination of economic and financial policy, which meant that countries had to give up a big chunk of their monetary and financial independence. This, according to some (I was one of the critics), was not only unfeasible – ‘real’ power in the EU was still decentralized, and Brussels did not really have the power to force member countries to obey whatever rules they wished to ignore – but also not linked to some kind of European civil society, the ultimate popular basis for democracy. The euro experiment, therefore, was potentially dangerous – it might undermine democratic structures and institutions in both Europe as a whole and in the member countries. The hope that supra-national institution building and the formation of a pan-European civil society would follow in the footsteps of the greater coordination of financial and monetary policies that was required, was not realistic.

After twenty odd years, it is perhaps time to see what the EMU brought us. Let’s have a look at what the euro meant for the two parts of Europe that are relevant here: the south (Spain, Italy, Portugal, Greece and Cyprus) and the north (Germany, Belgium, The Netherlands, Austria, Finland and Ireland). France is an in between case – adding it to either the north or the south does not change the picture a lot. The idea of an economic union (or other forms of economic integration), is that the low income countries/regions catch up: they are producing below the ‘efficiency frontier’, but integration will open up new markets, lead to capital market integration, similar institutions, etc.. all favoring convergence within the union. And that is what we have seen in the 1970s and 1980s, when the south was joining the club (Italy was already a member from the start). On the basis of the Maddison database, I have measured the degree of convergence in two ways: the unweighted average of the GDP per capita of the 5 southern countries divided  by the unweighted average of GDP per capita of the 5 northern countries; and the standard deviation of GDP pc divided by the average for the entire group of 10 countries. I did not weight by population size, as each country is seen as a separate ‘experiment’, but the two patterns – south and north – are so distinct that I expect that weighing by population will not change the picture. 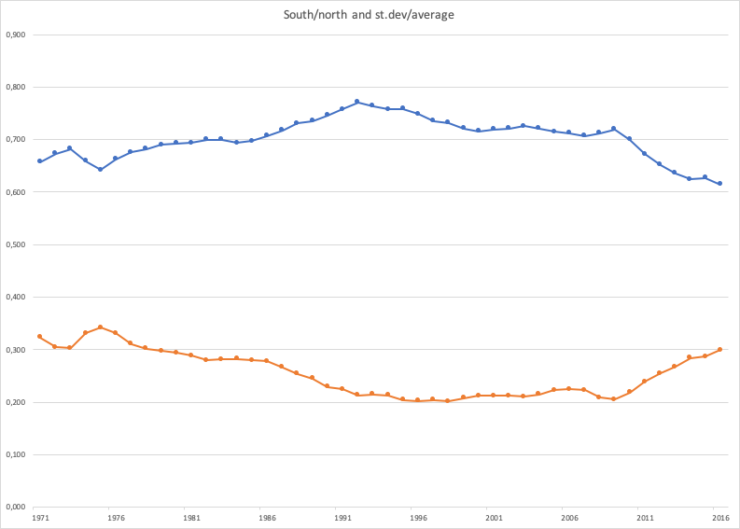 The upperline is the ratio between the average GDP per capita of the 5 southern countries and the 5 northern countries. It shows that in the 1970s and 1980s economic integration was doing its job: the low income countries in the south were catching up, which is also clear from the decline of the variation coefficient (standard deviation/average) presented as the lower line. In the early 1990s the south/north ratio peaked, and from 1992 on there is little decline – or stability if you look at the variation coefficient. After 2008 the pattern changes again: the variation coefficient moves up quickly – meaning that the rich are doing much better than the poor – and the south/north ratio starts to fall rather dramatically.

The post 2008 change in trends is well-known – it is linked to the European continuation of the financial crisis of 2008, and the huge problems countries in the south had to deal with after 2008, and the lack of an escape-valve due to the strict rules of the EMU. The break in the trend in the early 1990s has not received much attention, however. It is ironic that the very moment the Treaty of Maastricht was signed, in 1992, which promised to speed up convergence within Europe thanks to the creation of the EMU, convergence stopped. In order to show that a country qualified for the EMU, they had to reform their policies in the 1990s, which may help to explain the change at about 1992. Of course the northern view of this is different: the changes in financial and monetary policies that were introduced in the 1990s had to be accompanied by structural reforms in labour markets, pension systems, and the liberalization of the southern economies in general, to make them more competitive on international markets (but this view fails to explain why convergence before 1992 did happen).

Other things changed as well in the early 1990s – the fall of the Berlin Wall set in motion a whole chain of events that lead to the expansion of the EU into central Europe, and the convergence of the central European countries, which became the ‘new periphery’ of the EU. The euro played only a secondary role in this convergence process. The most successful convergers (Poland, Romania, Hungary) were so wise not to join the euro. The Baltic States who did join – mainly for military strategic reasons – are converging less rapidly. But for southern Europe the expansion into the EU meant that their strategic position changed, which may have affected performance.

Whatever is the case, from the southern perspective we now look back on a period of 30 years in which no convergence with the north has occurred, and the last ten years have seen a dramatic divergence, which –also in corona times – seems to accelerate. The Treaty of Maastricht did not accelerate convergence, but ended it – and therefore was a mistake. It is understandable that the frustration about the euro-system is mounting, in particular in recent years. As far as I am concerned, the question is now how to deconstruct the euro-system in a way which will not harm the European Union and the European economy.