The Olympics are postponed for a year! Nothing is certain anymore, for sure. One reason to be disappointed is that participation at sport events reflects the countries that compete. An interesting dimension of sports is that there are team sports and individual sports, which require different skills. 11 individualists will never win a soccer match; you need perhaps at least 8 players who ‘sacrifice’ themselves to get the striker to strike. The idea is that some cultures are better in this than others, and that the performance of their athletes may demonstrate this.

Golf offers a nice example. The peak event of golf is the bi-annual Ryder Cup, where an American team plays against a European one. Individually, the Americans rank much higher on the international lists of top players; they have real superstars like Tiger Woods. But the European team has been much more successful, beating the American 11 out of 20  times (and one was a draw). The match combines different versions of golf, and the more teamwork is required, the bigger are the chances that the Europeans win that part of the match. And it has become a tradition that Tiger Woods disappoints… So the conclusion is simple: Americans find it hard to work together (at the golf course), and the Europeans are much better at it.

We as Europeans love to hear stories like this: yes, they are superior, but we can compensate this with our cooperative attitudes and skills! 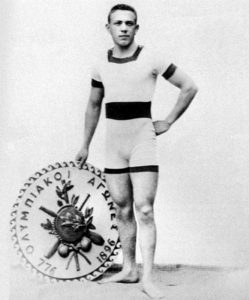 Obviously a message with considerable political implications. But is it true? One way to test it, is to look at the Olympics. It offers a much larger mix of team sports and individual sports, and there are data going back to 1896 covering many Olympic events.  Some time ago Rex Hardeman collected these data, and together with Selin Dilli we started to analyse them. It is still work-in-very-slow-progress, and I hope Selin and Rex will not mind that I give you a sneak preview of some of the results. So we defined team sports (Rex only included sports with a team of 6 or more, so small teams of rowers, or relay athletes, are not included) and started calculating the share of medals from team sports in the total. We did this for the entire period, but limiting the analysis to the last 50 years or so gave almost identical results. The share of team sports in all medals was 24,7% for the entire population. The Netherlands scores significantly higher: 35% of Dutch medals go to teams. Belgium, probably the first competitor you have in mind, also scores a decent 25%, but most European countries fare much worse: Germany 17% (all Germanies put together, DDR 20%), France 14%, UK 18%, Italy 17%, Poland 17%, Sweden 24%, Norway 14% – only Spain with 58% (!) does much better than ‘us’ (but the absolute number of medals is low in the Spanish case; the total number they won is less than half the Dutch total). The USA, the real challenge, scores at 28% somewhat above the global average (Canada 33%). Russia/USSR is similar: 27%, and the idea that ‘communism’ furthers ‘cooperation’ is not really confirmed by China with only 15%. Koreans seem to be much better in team sports: 37%! And the Swiss disappoint with a very low 12%, and that the Alps do not inspire teamwork is confirmed by Austria with an excessively low 8%. Finally, the shining star of this comparison is Cuba: 43%.

Part of the explanation of these differences – and perhaps the good score of the USA – is the mix of sports which is traditionally practised in the various countries. The Americans are almost unbeatable in basketball, and Cuba’s high score is probably mainly caused by baseball. Winter sports are much less cooperative than summer sports, explaining perhaps the low score of Norway (but The Netherlands also does very well at winter sports, and still realizes 35%).

The data tell us something, but it is as yet unclear what the real message is. There is clearly not a simple contrast between European teamwork and American individualism; on average, the Americans scored better with team sports, which is a bit unexpected. It is certainly nice to see the Netherlands do so well in team sports, but many countries with strong cooperative traditions (in the tradition of the Rhinelandish model) seem to underperform with team sports. Does this mean that the medals at the Olympics do not tell us something about underlying values and norms, or are our expectations wrong, and are Americans much more cooperative when they have to? Is the drive to win in the US so dominant that it even drives individualists to become team players? In other blogs, we are going to look at other kinds of behaviour that can be read from the data on Olympic medals.