And now for something entirely different! Broad well-being! Which is a bit a clumsy translation of ‘brede welvaart’,  but this is probably a chance to add a concept to international academic debate, as there is not better word for it, as far as I know. Multidimensional well-being?  Anyway, you know what I mean – our group has been quite active in this ‘beyond GDP’  debate. Yes, it is another blog on quantification, but I promise that next week all blogs will be qualitative. 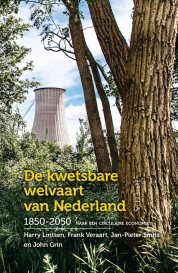 There is this impressive book by a group of scholars lead by Harry Lintsen about De Kwetsbare Welvaart van Nederland 1850-2050. I was a bit puzzled by the overall index of well-being they present as the core message of the book, which shows, after about 1950, hardly any increase in well-being anymore, whereas GDP per capita continues to rise. A gap opens up between the two, and the question is: why did so much economic growth lead to so little increase in well-being (see pp. 406-7). In the brede welvaart project that we carried out with Rabobank we arrived, for a much shorter period of time, at a similar conclusion. The underlying  issue is one of societal failure: why did income growth not result in a faster rise of well-being? Does this point to an underlying problem concerning the link between growth and inequality?

It recently became clear to me what is wrong, when I saw the underlying data of the Lintsen project and tried to reverse engineer from the final series of well-being they put together. There are a number of problems. Firstly, the most important ’other’ series that are usually used, those of life expectancy and educational attainment, are growing towards a certain limit (90 years or so for life expectancy, 20 for years of education). After a doubling of life expectancy from 40 to 80 years in the century after 1860, nobody expects this to increase to 160 during the next century; instead, both series grow towards asymptotes, and increasingly more economic growth is  ‘needed’  to  achieve the same increase.  A second set of series included in the broad index is even more problematic in this respect as they have no trend at all. Unemployment is an example: it goes up and down with the business cycle,  but you cannot expect a long term trend which keeps up with GDP per capita. Security (homicide rates), and perhaps environmental indicators (pollution by SO2 for example) show large swings, but not a consistent trend over time. Inequality measures show a similar absence of a consistent long term trend. The result of including such series in the broad welfare index is that long term growth of wellbeing will be lowered. And then, thirdly, there is the problem that many series are measuring their dimension of well-being ‘upside down’ (unemployment is ‘optimal’ when it is zero, and highly depressing wellbeing when it is high), so that some kind of formula has to be designed to create an unemployment series which show the opposite pattern (when high, well-being is high, as this is the general idea of the final well-being index). This is, more generally, the problem of standardization, to create, from the chaos of a multitude of dissimilar series measuring very different social and economic phenomena with different scales, a set of standardized series that can be compared with each other, and weighted to form one broad well-being index. The way in which this standardization is carried out (Auke already told me in 2014), defines to a large extent how growth – of individual series and by implication the final index – is distributed over time.

So I am not sure if a divergence between broad well-being and GDP growth is a significant issue, pointing to societal failure. The combination of well-being increasing by 1% and GDP per capita by 3% may simply be caused by the fact that they measure different things and use different scales. It may be significant to find that broad well-being goes down, and GDP per capita up (or vice versa). And comparisons of well-being between countries and time periods are, I think, not really affected by these problems. A lot of the important work we have done on this topic still stands, but we have to careful drawing conclusions from this research.