It is cold and silent in our garden. I hear a woodpecker, but he/she is at considerable distance. I have not seen the hedge sparrows for a few days now, and the spot in the large hedge they were building their nest in seemed abandoned, until a robin showed up. In the afternoon, when the temperature has risen a bit, he is very active, singing frequently and showing his nice red front to all who wish to see it. Yesterday a song thrush (zanglijster) was also present, but he did not sing yet (when he does, he always sings the same tune three times in a row, before moving to another song, which makes you wonder, can he count to three?). Has the robin occupied the nest of the hedge sparrows? And why is the robin displaying his coloured front so ostentatiously? 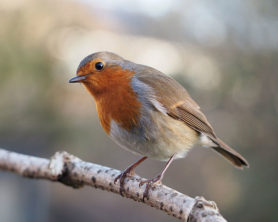 The robin with its deep red colour is beautiful, and he knows it. But why is he so red? What is the purpose of beauty in nature? The short answer is that it increases his chances to reproduce himself, to get chicks. Red is cool. Female robins prefer a partner with a strikingly red breast to the less reddish males. Robin that have very reddish genes, have a higher chance of finding a partner, get more offspring, and these genes multiply in the next generation, whereas the genes of the ‘dull-red-brownish’ robins disappear, because no girl wants to mate with a dull-red-brownish partner. And the same applies to singing (and because selection of partners depends on many features, in reality things are more complex). Robins have their coloured breast to attract partners; lapwings dance in the air – the lapwing who makes the most dazzling turns and twists is most attractive, and so the next generation of lapwings will dance even more spectacular than the previous one. All species have their own repertoires, their own mixes of behaviour and appearance to attract female mates.

This mechanism of the ‘survival of the prettiest’ was already discovered by Darwin (who wrote about it in his second book, on the origins of men), and he coined the term ‘sexual evolution’ for it. The big debate among biologists is whether this is an independent axis of evolution, or just another dimension of ‘survival of the fittest’. Does the female robin select the most reddish partner because the colour is a signal of general fitness of the male – will he have better genes, be a better father, be more ‘fit’ in general? – of simply because she likes a very red partner? This is a highly technical debate. Darwin thought that this sexual evolution was an independent force shaping nature. He pointed out that the peacock illustrates this: he has such a long tail that this lowers his evolutionary fitness as it becomes easier for a tiger to catch the bird. Beauty and fitness may in fact conflict – the robin is much more visible than the hedge sparrow for the cats that sneak through our garden.

But Darwins insights were criticized and almost forgotten, until four years ago Richard Prum published his book on ‘the evolution of beauty’. The problem with the theory developed by Darwin, Prum explains, is that women are the driving force behind the evolution of beauty: they select the colours, the dances, the songs that are cool, and reward them with generous reproduction. In other words, female preferences as they persist and develop over time, determine the entire process. By contrast, men are quite powerless – they compete strongly with each other, but in the end simply have to wait and see whether they are selected or not. And such a view on nature’s development was, Prum argues, not very consistent with the Victorian (and post Victorian) view of the world. The Darwin/Prum story is very plausible I think (and fits more nicely into the gender relations of the 21th century), but the problem remains to explain why generations of female robins at some point in the past developed a taste for red (and Lapwings for sky dancing), and persisted for the next million years or so.

Another interesting idea based on this research is that in the most spectacular example of sexual evolution – the paradise birds, the manakins – men only play a very secondary role in reproduction (it takes a few seconds to mate), and female birds are completely in charge of the entire process from building the nest to raising the kids. Highly equal gender relations, where men and women share all tasks, seem to correlate with the absence of spectacular forms of beauty; the identical greyish-brownish hedge sparrows who used to be in our garden are a case in point. So gender inequality breeds beauty (literally!). But on the other hand, it are the males who exhibit the most extreme colours, who dance on the place of display (the lek), who sing the most beautiful songs. You might almost think that they are in charge of the production of beauty.

I am not sure what the implication are for understanding beauty in human culture. What does it mean that biologists tell us that art is the product of sexual evolution driven by gender inequality? I really don’t know, but it may perhaps give some food for thought. At this very moment, the white cat of the neighbours is cruising through the garden, and is it the survival of the fittest, and not the prettiest, that counts.

Continue reading: Charles Tilly in Palestine: the people of Israel demand a king (2-4-2020)