What happens when people can without impunity break the law? For example, in the busy city of New York park wherever they like? Diplomats at the UN cannot be forced to pay such fines, as they have diplomatic immunity. But the parking police of the city does register these tickets, and two smart economists, Raymond Fishman and Edward Miguel, in 2006 published a paper analyzing these data. They for example know the countries of the perpetrators, and make a classification – correcting for the size of the diplomatic missions – of the number of tickets per country. Kuwait ranks number one – with 246 tickets per diplomat during the 1997/2002 period – followed by Egypt (134), Chad, Sudan and Bulgaria. There is, at the other extreme, also a group of 18 countries without violations, including the UK, The Netherlands, Japan, Greece and Canada, but also developing countries such as Burkina Fasso or Equador. Fishman and Miguel link this to corruption, and on a blog by Jon Bruner you can find the map printed below of ‘diplomatic parking scofflaws’ compared with the more usual, but highly subjective corruption index. It is for example striking that Russia does so poorly on the corruption index, but scores very low on the parking fines index. 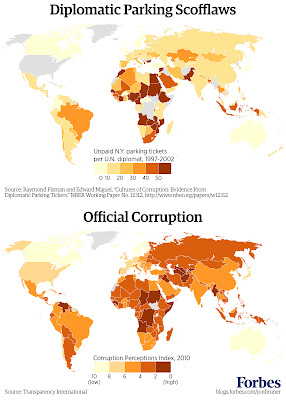 In his 2017 book The Moral Economy, Samuel Bowles (a leading social scientist who has pioneered experimental research focused on human motivation and incentives) uses this example (and many others) to speculate about the long term effects of capitalism on behaviour. On the one hand it has been shown that the market and the related material incentives tend to lead to ‘moral disengagement’, to an undermining of fairness and other intrinsic forms of motivation. When you notice that, in your country or social group, only money counts, you will be tempted to behave as if only money counts. On the other hand, countries such as England and the Netherlands with the longest experience with capitalism, seem to be characterized by, according to Bowles, ‘admirable civic cultures’, as illustrated by the parking tickets. 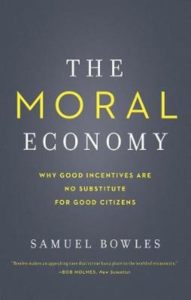 So the problem is why has our exposure to capitalist incentives not eroded our behaviour; why is there still trust and charity and cooperation in such a deeply capitalist society? Why are we not entirely corrupted by the pursuit of short-term gains? Or are we?

Continue reading: The most beautiful notes in classical music (5-4-2020)